Posted on November 1, 2015 by reclaimschools 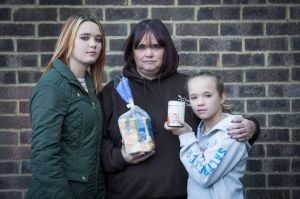 In part 1, we brought together statistics that showed how seriously poverty impacts on attainment. Government ministers are constantly trying to divert us from this fact by pointing to variations between schools. While there are some differences, they are often less than claimed once all the relevant factors are taken into account.

We cited a major study by Cassen and Kingdon (2007), based on official data, which concluded that, other things being equal, ‘only about 6 percent of the net association between FSM and low achievement is due to FSM students attending worse quality schools’.

One government study goes even further. Identifying components of attainment gaps (DCSF 2010) judged that family income and material deprivation accounted for around 3 GCSE grades whereas school effectiveness explains only one sixth of a grade. School effectiveness came bottom of their list of 11 factors including prior attainment, parental employment, parents’ qualifications, school composition and area deprivation.

Yet Government policy is entirely premised on eliminating differences of ‘effectiveness’ between schools. This is an act of symbolic violence which seeks to make teachers feel culpable, whilst concealing the real problem.

Some schools work wonders in reducing the impact of poverty, but there are limits: it requires extreme dedication and energy, and is often not sustainable. It is good to learn from good practice but schools cannot, in the end, compensate for a low-wage and fractured economy.

Poverty has already impacted on children’s development by the time they start primary school – which does not mean blaming families, as government ministers would prefer us to do. Attempts have been made to build this fact into accountability formula, such as Contextualised Value Added (CVA),  now abandoned.

This is no solution, since children growing up in poverty have an ongoing tendency to fall even further behind. Research by Paul Gregg and Elizabeth Washbrook (2009) concluded that:

Children from low socio-economic backgrounds perform less well on tests at age 7. Poor children who perform well at 7 are more likely than rich children to have slipped back by age 11, and poor children who perform badly at 7 are less likely to catch up over the period. Our estimates imply that over a third of the gap between the richest and poorest children at age 11 emerges after the age of 7.

The problem continues in secondary school. Children who are already behind at age 11 tend to make less progress in KS3 and 4. In fact, 92% of pupils with an average KS2 level 5b made ‘3 levels of progress’ in Maths, compared with only 26% of those starting at 3b. No wonder the government have had to jettison levels – it was clearly unworkable. (see Henry Stewart: Why 3 levels of progress is a very silly measure)

A large part of this difference is due to poverty. Official data (SFR 06/2015) shows that about three quarters as many FSM pupils make ‘expected progress’ as non-FSM in English, and two-thirds as many in maths. (57% compared with 74%, and 46% compared with 69%). There is a general problem which cannot be pinned on a few ‘ineffective’ or indifferent teachers.

Even those pupils from low-income families who are succeeding at age 11, against the odds, risk falling behind in secondary school. One reason may be that they become increasingly aware of what is stacked against them.

Wasted Talent (Sutton Trust 2008) looked at high achieving pupils on free meals. FSM pupils were less than a quarter as likely to be in the top fifth nationally at age 11. Of those that did make it that far, only a third were in the top fifth at age 16 and only a sixth went to university at age 18. This is a massive attrition rate. 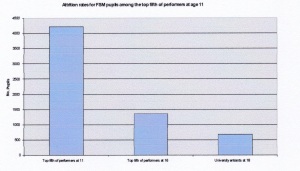 The new Progress 8 score will based judgements on what typically happens to pupils with a similar starting point, so it appears to evaluate more fairly than previous calculations of ‘expected progress’ or levels. However, young people experiencing poverty – and their teachers – will continue to lose out. Comments and data received from Education Datalab suggest that, on average, pupil premium candidates score 5 GCSE grades less on Attainment 8 and Progress 8 than other students with similar starting points.

It is encouraging that some schools seem better at mitigating the impact of poverty – and part 3 will discuss some of the reasons – but this cannot provide an excuse for a government which is crushing low-income families while blaming teachers.