Posted on September 11, 2016 by reclaimschools

Schools were only just back after the summer when Theresa May announced her intention to increase the number of grammar schools. Will this Government stop at nothing to undermine the principle of a good education for every child?

This announcement is about more than just Conservative nostalgia. It forms part of a strategy to undermine public education. The package includes turning all schools into academies, preventing any local democratic control and removing parents from governing bodies.

But the grammar school proposal will alienate many of the parents the government hopes to get on board. Opposition has already been expressed from sources which might normally be sympathetic to the Government, including Oxford University and one of the largest academy chains.

The Government’s claim that grammar schools will benefit low income families is an insult to our intelligence. There is overwhelming evidence that selection at age 11 pushes children from poorer families into second-class Secondary Modern schools. To speak of ‘inclusive grammar schools’ is a contradiction in terms.

Even Ofsted’s chief inspector Michael Wilshaw has denounced the move:

“The notion that the poor stand to benefit from the return of grammar schools strikes me as quite palpable tosh and nonsense.”

In the grammar school period, only 2% from skilled manual worker backgrounds got into university, and 1% from semi- or unskilled. This compared with 33% of those with ‘higher professional’ fathers.

What happens nowadays in areas with grammar schools?

There are many reasons for this, including parents with more limited education being unable to help their children with homework or lacking the range of vocabulary expected in the entrance exam. In one sense, money gets children in: better-off families pay for private tutoring for the entrance exam.

One study found that, even among the highest achieving pupils at age 11, poor children were only half as likely to get into grammar school as other children with the same KS2 test scores!

Selecting children also means deselecting children, and at age 11 this is immoral and unjust. The image only looks enticing if we forget the 80% who end up in lower-status schools. 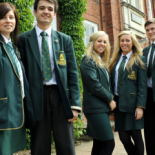