School cuts or taxing the rich?

The school cuts of around £3 billion are being presented as a necessary saving because of the need for ‘Austerity’. The School Cuts website, which has information for every school, shows that 99% of schools will have a per-pupil cut, an average of 8% from 2015/16 to 2019/20.

Some areas are hit harder than others. Among major cities, Birmingham and Liverpool faces cuts of 12%, Nottingham and Inner London 13%, and Bristol and Manchester 14%.

There is likely to be a massive reduction in the number of teachers and teaching assistants. The cut is the equivalent of nearly 3000 teachers in Birmingham, 1200 in Bradford, 1000 in Leeds, 1400 in Manchester, and over 2000 in Essex, Hertfordshire, Kent, and Lancashire.

Corbyn is being cast as irresponsible for promising to overturn the cut and repair the NHS. Doesn’t he understand Austerity?

It is becoming increasingly obvious that Austerity is code for vast increases in the wealth of the superrich, at the expense of the rest of us. The Sunday Times ‘Rich List’ traces the wealth of the richest 1000 people in Britain from year to year. This year their combined wealth rose by £82 billion, over 25 times the £3 billion schools cut. 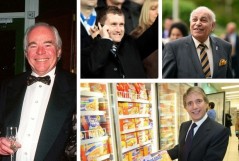 The financial crisis wiped out 37% of their wealth (2008 to 2009), but that was no more than they had gained in the previous two years alone, and they went on to recover most of their loss by the change of government in 2010.

Meanwhile the rest of the population suffers wage freezes, public service cuts and, for the poorest, vicious benefit cuts. The true meaning of Austerity Politics is wealth redistribution, not paying off the national debt.

Go to our homepage to download a flyer and speaker notes for General Election education meetings.

This entry was posted in Uncategorized and tagged politicians, school finance. Bookmark the permalink.